Forks Over Knives – The Cookbook ~ Review

Forks Over Knives – The Cookbook 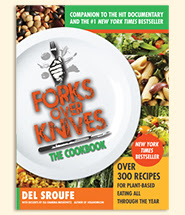 If you have been following me here on my blog, you know that I have been changing my eating habits since April 2012 and losing weight for the sole purpose of becoming a more healthy person. During all of this, my Doctor turned me on the the video Forks Over Knives and from there I have progressed to eating more vegetables. My daughter on the other hand has decided to go the Vegan route and give up everything that has to do with animal products all together. I however love my cheese and eggs and can not see me going vegan anytime in the near future but I don’t see anything wrong with the vegan diets whatsoever.
Now, Forks Over Knives – The Cookbook is a vegan cookbook, meaning that there is no animal products used in anything in any of the recipes at all…meaning it is the perfect cookbook for her. I, however thought when I got it that it was just a vegetarian cookbook but just so happens it turned out better because I didn’t know what to fix for my daughter to eat with her turning vegan on me.
She runs her own business, pizza business and before you ask I will answer your question. It is not vegan. Anyway, she works evenings and is only home one evening per week for dinner so I really only fix dinner for her once per week but I want to honor her vegan wishes so this cookbook came just at the right time.
Here are two meals that I have fixed so far: 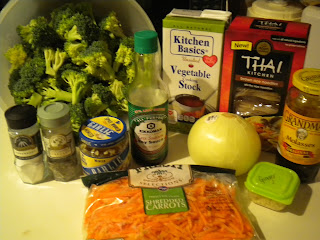 Five Spice Noodles
CHINESE FIVE SPICE powder is a popular seasoning for any number of meat or vegetable dishes. Made from star anise, cinnamon, Szechuan pepper, fennel and cloves, a little of this pungent spice goes a long way.

2. Heat a large skillet over high heat. Add the carrots and onion to the pan and stir-fry for 2 to 3 minutes. Add water 1 to 2 tablespoons at a time to keep the vegetables from sticking to the pan. Add the broccoli and snow peas and cook for 2 minutes, stirring frequently. Add the garlic and the sauce mixture and cook for 3 minutes longer. Remove from heat and toss with the cooked noodles.

I did not use the snow peas because Krogers snow peas looked awful and were all spotted and yucky. 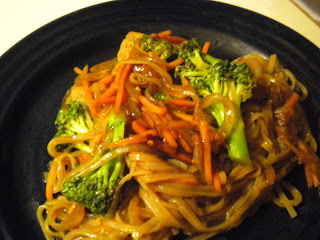 Now, what did I think about the Five-Spice Noodles? I found out that my whole family did not like the Chinese Five Spice powder. It has a black licorice smell and flavor. I do have to say that if I would have left that out, we all agreed that the meal would have been a great hit. Everyone ate it but we all commented on how we would have liked it much better without the Five-Spice. Peanut Noodles with Broccoli
Serves 2
1. In a medium pot, bring 6 to 8 cups water to a boil over medium-high heat. Once boiling, add the rice noodles and cook according to package instructions — usually 4 to 5 minutes, or until tender. Add the broccoli florets to the cooking water and cook for an additional minute. Drain the noodles and broccoli and set aside.

3. Add the noodles and broccoli mixture to the peanut sauce. Use tongs to mix well, serve.
Printable recipe 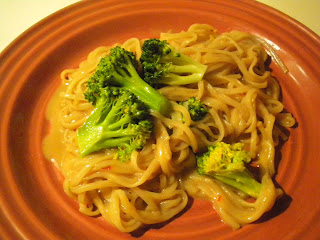 Now, I thought this peanut sauce was really good. The red pepper flakes gave it that little kick that gave it a flavor that I didn’t think would go with the peanut butter but it went together with the broccoli really well. When I first read peanut butter and broccoli I thought there is no way that those two ingredients could go together but it was a great hit. Here four days later my daughter and I are wanting more so I think tomorrow I will fix us some for lunch.
There are a lot of other recipes in the Forks Over Knives – The Cookbook that I can not wait to try, especially some of the desserts. I will post some of them as I fix them so keep an eye out for them.
This is a great cookbook for both vegetarians and vegans.
You can check out Forks Over Knives:
on their website
on Facebook
on Twitter
Disclaimer: I have received product from The Experiment Publishing in return for this review. I have stated my honest opinion and in no way was paid for a positive review and received nothing more after I received the book to review. Book images is from Forks Over Knives.